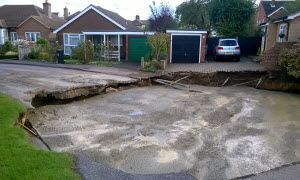 Hertfordshire County Council has released data which suggests a hole three times the size of the St Albans sinkhole could open up.

According to the survey, the cave in happened on the weak grounds of a clay pit that was dug up in the 19th century for brickmaking.

The survey by Geotechnology Ltd suggested “chalk excavation in the bedrock beneath the clay pit” was most likely the reason behind the sinkhole, which is expected to take at least six months to fill.

Further investigation will be necessary to determine if the potential of a larger hole puts the remaining households and families in the area at risk.

Some of the Fontmell Close residents still have no water or electricity, while five families will remain locked out of their homes during the Christmas period.

Rob Smith, the deputy director of environment at Hertfordshire County Council, said “the safety of residents” remains the council’s priority.

In an interview with the Review, Mr Smith said: “It is not my job to say whether they should be staying in the house. It is really important householders talk to their insurers about what we know.

“The impression I got from talking to people was that different insurance companies were taking different approaches. Some seem to be engaging and others seem to be saying ‘I don’t think you are at risk'.”

A geophysical survey of the road and footpath in Fontmell Close and Bridle Close took place between 3 and 11 October after a 12 metre diameter and 7 metre deep sinkhole appeared in the early hours of Thursday 1 October.

Mr Smith said: "Since we received the report we have met with residents to discuss its findings and to help them understand the contents of the report.

"We appreciate this is upsetting news and are continuing to work together to determine the next steps. The safety of residents remains our priority.

"We are keen to enable people in the area to be able to come and go from their homes more easily and are looking to create a more permanent temporary access road."