Yellow Comedy was founded by Watford's own Andrew Carberry in 2015 to bring great comedy to Watford and they are bringing their biggest ever FREE Comedy show to the Attico Art Centre, First Floor, 101 High Street, Watford on Saturday 19th March. Doors will open at 7.00pm, with the comedy starting at 7.30pm, featuring Special Attraction Clinton Baptiste from hit Channel 4 show Phoenix Nights and Headliner Andy Gleeks.

Clinton Baptiste is a clairvoyant, medium and psychic best known for his appearances on Peter Kay's award winning Phoenix Nights. Clinton will contact the dead but beware they won't always tell you what you're hoping. Clinton says he's really looking forward to harnessing the spirits in Watford that he feels are very strong indeed in association with Alex Lowe.

Andy Gleeks is an incredibly likeable, charming and engaging performer and audiences warm to him for his honesty, his quick-wit as well as his own idiocy. Andy hails from Northern Ireland by way of Buckinghamshire. Dripping with sarcasm and dry wit, Andy's routines, stories and one-liners are delivered in laidback, laconic style. 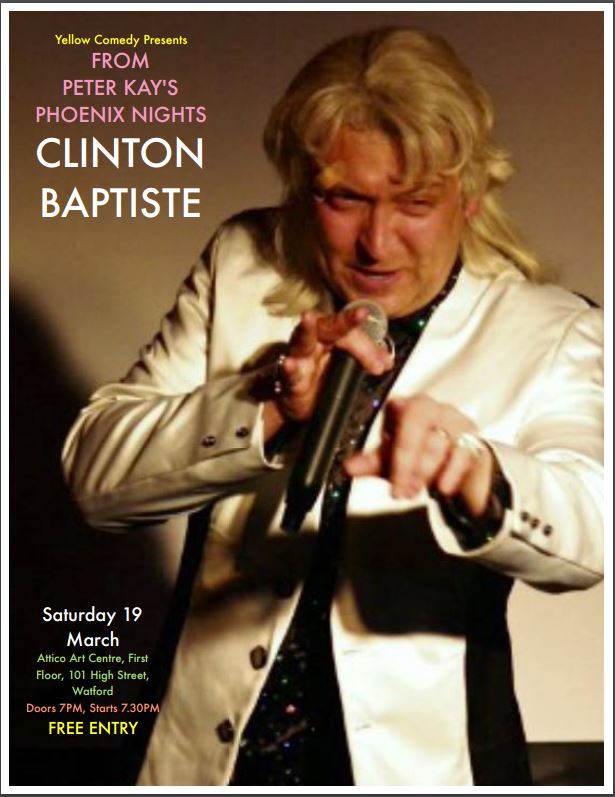 In addition, there will also be another 5 of the best up and coming stand up and alternative comedians on the UK open mic circuit appearing including local alternative comic Arthur Turner's last appearance in Watford.

It is free to get in but there will be a bucket donation at the end of the night where 100% of profits will go to supporting Future Yellow Comedy Events in Watford. So for a night of great comedy get down to the Attico Arts Centre in Watford on Saturday 19th March!