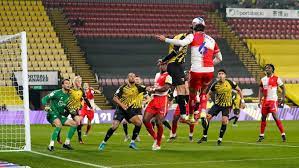 Watford returned to winning ways with efficiency, beating Wycombe 2-0 at Vicarage Road. A brace from Andre Gray on his return to the starting XI was the difference, despite a competitive battle between the two sides.

With Joao Pedro and Nathaniel Chalobah suspended for the Hornets rotation was inevitable, but the change of system was surprising. Philip Zinckernagel started for the first time in the league, Dan Gosling was omitted entirely from the Matchday squad due to a knock and William Troost-Ekong entered the fray for Craig Cathcart. Andre Gray was the man trusted to fill the boots of the Brazilian teenager up front. A 4-2-3-1 at first glance, and Watford fans were content with that system prior to kick-off.

As for the visitors, Anis Mehmeti dropped to the bench as Joe Jacobson and Ryan Tafazolli returned to the starting XI. Jordan Obita wasn't in the squad at all despite starting last weekend vs Norwich.

The formation hadn't actually changed for the Hornets despite previous assumptions from supporters online. Philip Zinckernagel was deployed in an unfamiliar position in the centre of midfield, rather than out wide or behind Gray. This didn't appear to have a detrimental effect on his ability though; the Dane looked energetic and was involved in all thirds of the pitch from the first minute. There are certainly areas where he looks a little rough around the edges, like when he needlessly brought Uche Ikpeazu down outside the 18-yard box early on, but these are minor issues.

Watford's joy was largely coming from the flanks. With usual winger Zinckernagel drifting throughout and Kiko Femenia overlapping Ismaila Sarr the Wycombe full-backs often had to take on two at once, and this was the downfall of the Chairboys.

The opener came in this exact fashion; Femenia bursting forward past Sarr and playing a deadly driven cross for Gray, who still had plenty to do but converted it nonetheless. Now the Hornets had their goal, and it was definitely deserved.

This isn't to say that the visitors weren't causing problems though. Former Watford striker Uche Ikpeazu was a handful for both William Troost-Ekong and Francisco Sierralta to deal with, but they did a good job of limiting the threat that he posed. This is a huge positive for Xisco Munoz to take; against strikers of this ilk this season his side have sometimes found it difficult to cope. Charlie Austin and Kieffer Moore both took advantage of this at Vicarage Road earlier on this season but Ikpeazu had no such luck tonight.

The hosts' penalty appeal went unrewarded on the stroke of half time. Ismaila Sarr darted ahead of Joe Jacobson on the right flank directly from Daniel Bachmann's kick, and when the Senegal International fell to the deck there was a moment of consideration from the man in the middle, but the linesman to his side confirmed that there was not enough contact for Sarr to go to ground.

The second half started in slightly disjointed fashion. Wycombe had stepped up the intensity and started to knock on Watford's door, as Munoz's side failed to create much for the first few minutes. This all changed however. Ismaila Sarr played a short pass across to Zinckernagel, and the January signing dummied three Wycombe defenders twice before finding an opening. The through ball met the feet of Gray who confidently slotted home for the second time in the evening. Now Watford had a cushion and with the stability in defence shown for large parts of the game and of the season as a whole, it felt like game over for Gareth Ainsworth's side.

They did find the net through David Wheeler but the linesman denied the midfielder, raising a flag for offside. In the attack Wheeler seemed to tread on goalkeeper Daniel Bachmann, but the Austrian got up and continued as normal following a brief moment with the physio.

Tom Cleverley also picked up an injury, and his appeared to be more serious. The captain was withdrawn following a heavy tackle and replaced by Ben Wilmot. There was also an opportunity for Under-23's winger Joseph Hungbo to enter the fray, and his sprints to the byline would have resulted in a third had Stipe Perica reached the end of his teasing crosses. There wouldn't be a third, but two will do for Xisco and co as they look on to an equally difficult contest at home to Nottingham Forest this weekend.

On the disallowed goal: "It did look onside but forget that, we didn't do ourselves justice tonight. We were below par against Watford, one of the best teams in the league."

"Brilliant performance from Gray. I'm happy because I know he works hard every day."

The Head Coach expressed his delight at the performances of Philip Zinckernagel and Ismaila Sarr, and when asked about the latter's potential he laughed, and simply said "top!