Following their impressive yet turbulent 3-1 win in midweek over Blackburn Rovers, Watford will be hoping for a more comfortable 90 minutes on Saturday. But it's unlikely that'll be the case, as they take on fellow relegated side AFC Bournemouth.

Head Coach Vladimir Ivić echoes the sentiments of many Watford fans in being optimistic in the long term, but remaining firmly with his feet on the ground. Whilst the more positive side of Hornets fans revel in the talent currently at the Serb's disposal, he makes sure to point out that there is still more to come, with the likes of Will Hughes, Andre Gray and Club Captain Troy Deeney still sidelined, plus Étienne Capoue only just getting back into the rhythm of consistent football.

Ivić stressed in his Thursday Press Conference that rotation is important in this period, as his side face five games in just over three weeks. For this reason, don't be surprised if a consistent starter like João Pedro rotates out, in a similar manner to Jeremy Ngakia's bench appearance in midweek. Yet again, the Head Coach has opted to omit the name of the "mystery player" potentially returning to the squad for the Bournemouth game, but it is likely to be one of the central attackers, Gray or Deeney.

Will Hughes (back training, doubtful)

Bournemouth is not venturing into new territory when they travel to Hertfordshire on Sunday lunchtime. Both sides enjoyed a five-year spell in the top-flight prior to last season's relegation and closely contested the Championship Title race in 2015.

There's a new face at the helm following Eddie Howe's departure at the end of last season, but no stranger to the dugout at the Cherries. Former assistant head coach Jason Tindall took charge and has so far fared well as the No.1. Like Watford, Bournemouth managed to hold onto their wanted winger, with David Brooks' steep price tag scaring off Premier League interest. Brooks has caused the Hornets trouble at Vicarage Road before, scoring in a 4-0 win, and will be backed by his supporters to do the same in front of the Sky cameras. 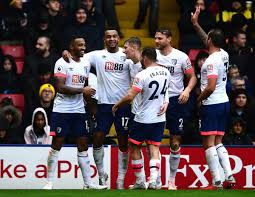 Bournemouth will no doubt want a repeat of their 4-0 victory at Vicarage Road this Saturday.

The visitors are one of only two sides yet to taste league defeat this season, alongside league leaders Reading, but their 3 draws mean they sit below the hosts in 4th. They managed to steal exciting Spanish Winger Rodrigo Riquelme on loan from under the noses of the aforementioned Reading, and have Junior Stanislas back after a month on the sidelines.

Tindall lines up his Bournemouth side in a 3-4-3 formation but isn't afraid to tweak this to suit the opponent. The Cherries score frequently but via a number of different players, rather than a sole attacking focal point.

The freshest memory of this tie for both sets of fans is the dominant 3-0 Watford win on the coast. Departed fan favorites Abdoulaye Doucouré and Roberto Pereyra were on the scoresheet, alongside Troy Deeney.

The last game at Vicarage Road between these sides was less of a classic. A 0-0 draw during the Quique Sánchez Flores era of last season.

Watford and Bournemouth haven't faced in the Championship since the 30th of January 2015. Goals from Yann Kermorgant and Matt Ritchie were enough for Howe's side to see off a 10-man Watford after Gabriele Angella was wrongly dismissed just 26 seconds into the game. Craig Cathcart and Troy Deeney are the only Watford players remaining from the side who played on that day. 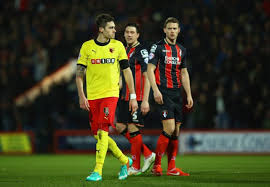 Angella was almost instantly sent off in the last Championship tie between the Hornets and the Cherries. Thankfully, the dismissal was overturned.

There is a risk of Ivić's rotation plans scuppering this, but Ken Sema's assist for Darragh Lenihan's own goal on Wednesday demonstrated his importance on the left flank, and the threat he can bring both when crossing and cutting in. The Swede continues to impress this season in his new role and has scored and assisted against Bournemouth before.

The Dutch winger has thrived this season so far, with a spot on the left nailed down under Tindall. You need only to watch his strike against Blackburn on an opening day to see why he could cause Watford problems. David Brooks isn't definitely fit for the trip to the Vic, but if he is, expect some fireworks on both flanks, from both sides.

Another very tough game to call. Now that the goals are flowing for Watford, we could see a high scorer. Having said that, William Troost-Ekong's likely inclusion in the Starting XI may nullify the Bournemouth attacking threat. A Watford win (just).

Televised? Yes, on Sky Sports. Thankfully not the Red Button.

It's a return to FA Cup action at the Vauxhall Ground, as the Tudors play for the first time in the competition since the start of the month, having received a bye in Qualification Round 3. They face an HRBFC side who are also yet to taste victory in the National League South.

It's another Saturday 3 o'clocker, and another FA Cup qualification tie, as the Wood face Premier Division South outfit Wimborne Town. The away side play in the same league as Hertfordshire club Harrow and will hope to pull off an upset over the National League hosts.

Another Hertfordshire home tie, this time in League 2, as the Boro look to break out of a miserable winless spell. They take on 15th placed Leyton Orient, who bested Tranmere Rovers in midweek.

Barnet: Away to Leiston

There's a two league disparity between these two sides, and Leiston currently sits bottom of the Southern League, Premier Division Central. Leiston drew to the local side Hitchin Town two weeks ago and will face Kings Langley also this season, but a different local challenge awaits Saturday afternoon.

St Albans City plays on Monday, away to Bishop's Stortford in the Fourth Round Qualifying of the FA Cup. It is available on BT Sport and is live on the Big Screen at Clarence Park. The entry fee is £5.

Are you looking for a fresh sports-themed podcast that caters to the local community? Are you missing the good old fashioned opinions that make football so exciting? Vibe107.6 have you covered!

Listen, download, and enjoy the Sports Vibe podcast as your voice is echoed through South-west Hertfordshire's biggest and most local radio station.

Download and listen to the latest episode by clicking here.

You can also listen on Spotify and itunes.