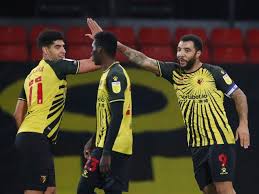 Troy Deeney's penalty was the difference as a tenacious and energetic Watford side saw off tough competition in Valerian Ismael's Barnsley.

The team was only slightly rotated following the 2-0 win over Huddersfield Town on the weekend, with Will Hughes and Andre Gray replacing Nathaniel Chalobah and goalscorer Joao Pedro. The wait continues for Philip Zinckernagel's first start in League Competition, but with a game on Friday away to Stoke, perhaps Xisco Munoz is biding his time. As for Barnsley, Romal Palmer came in for Herbie Kane in the centre of midfield in their only change from a 2-0 loss at home to Swansea City.

Both dugouts were vocal from the off; it was clear Referee Tim Robinson wasn't going to get away with anything. Xisco Munoz's analysts sat in the Press Box, barking orders at the players and conversing in Spanish (plenty of Vamos throughout). Barnsley were instantly on the offensive and the front three of Chaplin, Woodrow and Adeboyejo pressed the Watford defence tirelessly. The early chance came from Adeboyejo on the right, collecting a fantastic through ball from Mowatt, but his cross was blocked impressively by the sliding Kiko Femenia. Daniel Bachmann was more active in the first 10 minutes than the full 90 on the weekend.

Troy Deeney was more energetic than usual, linking up with Andre Gray on several occasions, and playing almost as a 'number 10', dropping deep and picking up the ball from the midfield before distributing it mostly wide to Sarr, or through the middle to his strike partner. The passes over-the-top to Sarr were effective, and Barnsley didn't seem to know how to deal with him, but his crosses failed to result in a goal despite some falling straight to the feet of Gray.

Deeney won possession of the ball on the left after 27 minutes, and his cross hit the knee, and then arm of defender Callum Brittain, leaving the referee little choice but to point to the spot. Deeney, as he always does, slammed it down the middle, and despite Walton's best efforts, it struck the back of the net.

Watford were dangerous on the attack, utilising the pace of Sarr and Gray with the use of looping through balls. Callum Styles had his work cut out for him, and he was constantly having to chase Sarr as the Senegal International whizzed past him. Gray had similar service, but lingered offside far too often. His movement was impressive at times but at times, like when his close-range effort went over, he didn't have his shooting boots on.

The second half started in a similar fashion to the first. Sarr dancing past defenders, both sides playing direct football, and Deeney dropping deep to become the playmaker. Will Hughes' deflected shot from a corner bounced off of the post, before Gray slotted it in, but once again, the former Hatter was offside. Just lacking the final product.

Barnsley's biggest chance of the game surprisingly came via a glancing header from Watford centre-half Francisco Sierralta, forcing a fantastic save from Daniel Bachmann.

Philip Zinckernagel and Joao Pedro's introduction indicated that Watford weren't satisfied with one goal. Zinckernagel looked classy on the ball, but didn't get too involved in the tackling side, which Xisco and his coaches were encouraging him to do. Watford were playing in a 4-2-4 now, but it didn't affect the defensive side of their game. The midfield felt almost irrelevant at times in this game, but Will Hughes' contribution cannot be understated. He committed to every challenge, played the ball out wide seamlessly, and allowed Watford to tick. With Deeney off, the ball was played on the ground more often, and Sarr and Zinckernagel interchanged on the wings; first with Sarr on the left, and later the new signing occupying that side.

Throughout all of this, Daniel Bachmann continued to impress me. His calmness on the ball, his distribution and enthusiasm at collecting loose crosses makes him a real contender for Ben Foster's number 1 spot.

Zinckernagel played a daring low cross towards the front post, and an unlikely attacker in William Troost-Ekong was at the end of it, with his shot inching agonisingly wide. He was taken off (for obviously unrelated reasons) moments later.

The four minutes of added time had drama in abundance. Ismaila Sarr tried to retain the ball in the corner closest to us in the Sir Elton John Stand, but was pulled up for a foul on the Barnsley defender. This lead to a brief tussle between Sarr and Helik, with both picking up yellows. Joao Pedro got involved too, but he was let off.

The Hornets saw off the Tykes despite a late penalty appeal by Cauley Woodrow, making it three home wins in a row. The Championship schedule continues to be relentless on the players and clubs, as Watford make the trip to Stoke this Friday hoping to achieve three wins on the bounce.

Valerian Ismael was happy with his side's performance, mentioning that they "forced Watford to play long-ball."

He was unsure about the penalty, comparing it to another decision last weekend in their 2-0 defeat to Swansea, and says they were unlucky that the Sierralta header was saved.

"We saw another great performance, the boys stuck to the game plan exactly as we wanted. The penalty was the difference today."

Xisco Munoz was in high spirits, claiming Watford feel they can "always have a chance of taking the points" when playing at home.

He praised both Troy Deeney and Andre Gray for their performances, and stated that once Gray scores one, he'll find his form and score "Again, again, again." 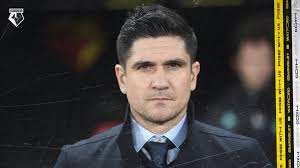 Munoz recognised that the away form needs to improved, but is delighted with 3 wins from 3 at Vicarage Road. Photo: Watford FC