Nominate your community heroes for the Mayor’s Pride Awards! 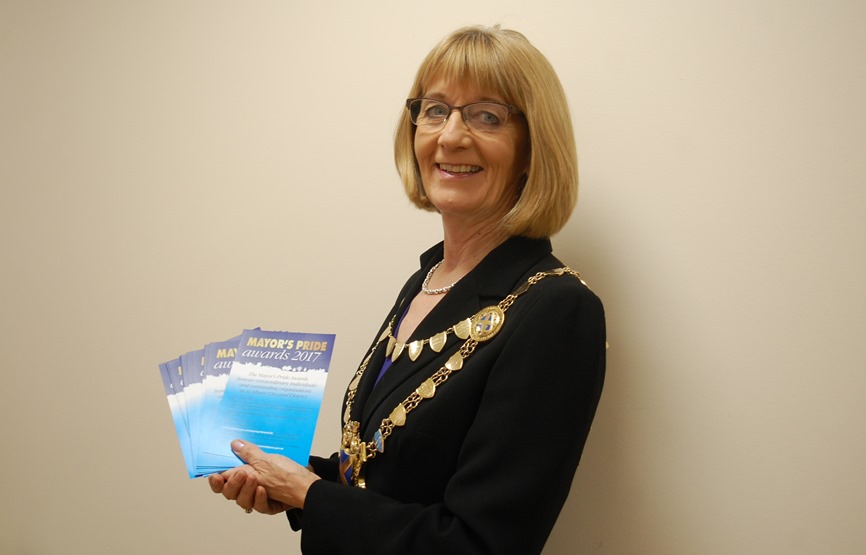 Cllr Frances Leonard, the Mayor of the City and District of St Albans

Nominations are now open for the Mayor’s Pride Awards 2017, held to celebrate extraordinary people and outstanding organisations that make a positive contribution to the local community in St Albans.

Ensure these inspiring individuals and worthy organisations get the recognition they deserve by putting them forward to receive an award. To make a nomination, simply complete a form online before the deadline of Monday 30th January 2017.

The categories this year are as follows:

- Community Champion of the Year

This award aims to reward people who have given up their spare time and gone out of their way to help others in the community.

Creative people or groups whose ideas or achievements are an inspiration to others can be nominated for this award.

This award provides an opportunity to commend an exceptional child or young person for their talent, positivity, energy or strength of character.

- Community Project of the Year

Recognition will be given to a project that has made a real difference to local people or has helped make the area more vibrant.

- Community Orientated Business of the Year

This award is for businesses in St Albans District that are working with the public or voluntary sector on initiatives to benefit the community.

- Environmental Champion of the Year

A group or individual showing innovation or commitment to improving the local environment will be honoured with this award.

Recognition will be given to a group or individual for making a real difference to the community through their work in the voluntary sector.

This award will be given to a community initiative that unites people of different ethnic, faith or socio-economic backgrounds.

In addition to the above awards, the Mayor of the City and District of St Albans, Cllr Frances Leonard, will also hand out her own special award. The Mayor’s Recognition Award will be given to a person or group that has made a significant impression on the Mayor during her year of office.

Cllr Frances Leonard, the Mayor of the City and District of St Albans, said: “These awards celebrate the real stars of our community, whether they are dedicated volunteers, local charities or innovative organisations. Please show your support for their hard work in the community by nominating them for these special annual awards.”

There is no limit to the number of nominations that can be made and people can nominate the voluntary group or organisation they work for to receive an award. However, they are unable to accept self-nominations for categories aimed at individuals. If you need any assistance in completing the form, please email or call the team on 01727 819311.

A shortlist will be unveiled by the Mayor in February 2017 and all finalists will be invited to a celebratory evening with the Mayor in March 2017 when the awards will be presented to the winners.