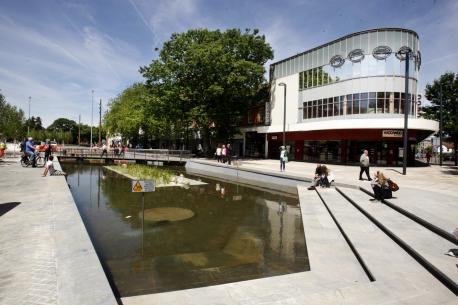 The new pond area is unveiled to Watford today for the first time since construction began. What's better, before or after?

The topping out ceremony for Watford's Pond was held on Monday 16th at 10am.

The symbolic ritual took place at the top of the pond by Rickmansworth Road. The event featured Mayor Dorothy Thornhill and pupils from Watford Central Primary School.

Together with a pupil, the mayor laid down the last pavement slab to commemorate the close yet timely finish of The Parade’s new pond.

Mayor Thornhill admits the project took longer than expected but remains enthusiastic. She said: “Nine tenths of the work on the pond has been absolutely brilliant. It has come in under budget but it’s slightly over time.

“What matters is that it will be done for Friday and we’re having our launch event when Mary Portas and I will officially open the space. Hopefully there will be a pond and I believe even the ducks have returned on time and on schedule so that’s great!”

The mayor, along with 11 pupils, released colourful balloons in an attempt to brighten up a grey Monday morning sky. She said: “I wanted to make this the 21st century pond.

“We want the town to be family friendly. It’s not just about drinking late at night so it was important to bring children because it’s about their space and reclaiming this space for everybody in the town.”

The official opening of the pond will go in hand with the 'Watfords Big Events' launch on Friday 20th June at 1pm.

All that remains to be seen now is if Hannibal the Heron and the ducks can be tempted to return.