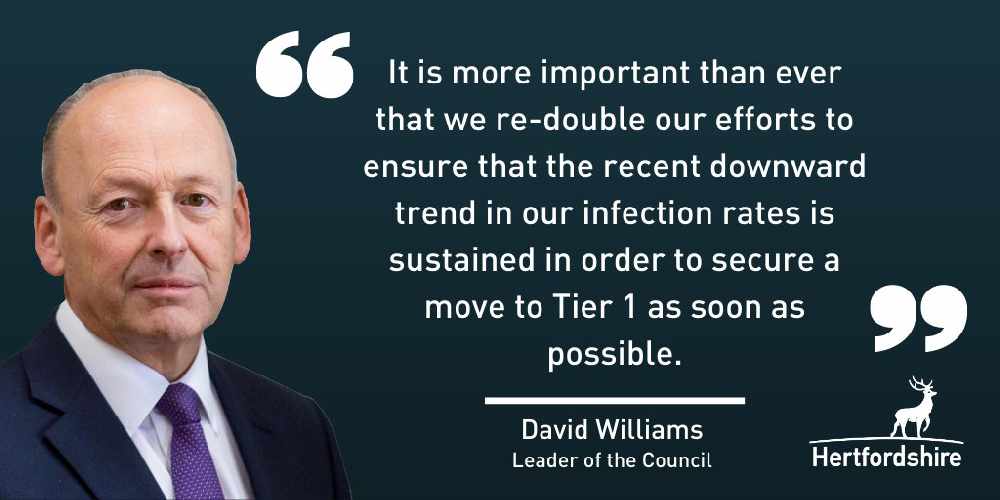 Hertfordshire will be placed into Tier 2 (High Alert) of the government’s revised three-tiered system of Covid-19 restrictions, when national lockdown ends on 2nd December. The county had previously been in Tier 1. Non-essential retail, places of worship and leisure facilities will also re-open in accordance with government guidance.

The confirmation of Hertfordshire’s position came after Health Secretary, Matt Hancock, revealed on Thursday that ‘the majority of England’ was set to move into Tier 2. However, he also confirmed that ‘a significant number of areas’ were required to enter Tier 3. The decision will be reviewed in mid-December.

New restrictions within Tier 2 include:

How have the County Council reacted to the decision?

Following the announcement David Williams, Leader of the Hertfordshire County Council (HCC), said the local authority had ‘been in ongoing dialog with the government’. In turn, he stated the ‘decision’ to move Hertfordshire into Tier 2 was ‘based on a series of indicators,’ which reflected ‘the continued prevalence of the virus in the county.’ Over ‘recent weeks,’ the County Council has worked ‘closely’ with the NHS, District and Borough Councils ‘in preparation for the end of the national lockdown.’ Mr Williams stated HCC was ‘well prepared to continue supporting’ local ‘communities to come through the new level of restrictions.’

“We understand that being in Tier 2 will bring concerns for many. These will include the restriction on socialising with anyone you do not live with or who is not in your support bubble in any indoor setting, as well as the economic consequences, especially for our hospitality sector. So now it is more important than ever that we re-double our efforts to ensure that the recent downward trend in our infection rates is sustained in order to secure a move to Tier 1 as soon as possible.”

The HCC Leader went on ‘to extend’ his ‘sincere thanks’ to ‘Hertfordshire residents who... continued to play their part’ during lockdown, ‘by adhering to the national restrictions.’ However, Mr Williams urged people to ‘not let’ their ‘guard down in the run up’ to Christmas, and noted ‘the virus’ was ‘still circulating widely in the community.’

While news of a vaccine marked ‘a significant step forward in the fight against Covid-19,’ he stressed how ‘we’ could not ‘afford to be complacent.’ The County Council Leader asked residents to help ‘lower the risks in our day-to-day lives’ by maintaining ‘the basics of hand washing, social distancing and wearing face-masks.’ This now also includes ‘following the restrictions which apply to Tier 2.’ Finally, Mr Williams advised people get tested if they ‘develop symptoms,’ and to self-isolate ‘when required.’

What is the government saying?

On Friday Prime Minister, Boris Johnson, defended the more robust system saying it was ‘essential’ and brought ‘clarity.’ There has been apprehension from some MPs towards the new alert levels. The government has said it would publish impact assessments of the amended restrictions, in order to address concerns. MP’s will vote on whether to approve the revised measures on Tuesday 1st December. Additionally, the Prime Minister recognised 'why’ some members of the public may 'feel frustrated’. He particularly made reference to those now situated in higher blanket tiers, where ‘there is very little incidence’ of the virus within 'their village’ or ‘area.’

What has the response been from local MPs?

After Thursday’s announcement MP for South-West Hertfordshire, Gagan Mohindra, said he was ‘pleased that shops, gyms, places of worship, entertainment and sports facilities will be able to re-open.’ He stated this would ‘give residents greater freedom following the national lockdown.’ Mr Mohindra advised under the new restrictions ‘there should be no mixing of household indoors, apart from support bubbles, and a maximum of six people from different households meeting outdoors.’ He added that ‘different rules’ were ‘in place for Christmas,’ with more information available on the government’s website.

Mr Mohindra went on to say:

“Like many others, I feel disappointed that we have not returned to Tier 1, but we know what we need to do to continue to slow the transmission of the virus. It is crucial that we follow the guidance of hands, face, space to keep our families and neighbours safe over the winter. The government will be reviewing regularly our tiering level so each of us needs to play our part to get us back to Tier 1 as soon as possible. The recent news of successful vaccines fills me with confidence that we are in the final stretch of the pandemic and will be well on our way to recovery in the spring.”

Watford MP, Dean Russell, commented that Hertfordshire’s Tier 2 placement meant the county was now ‘on High Alert, along with most areas of the UK.’ He acknowledged such a move would ‘unfortunately’ result in some pubs and bars closing, ‘unless they serve substantial meals with drinks.’ 'On a more positive note’ Mr Russell confirmed that 'shops, gyms, hairdressers and cinemas can re-open.’ Similarly, ‘golf and tennis' may 'also resume’ which would be ‘welcome news for many.’  The Watford MP was ‘delighted that communal worship’ could begin again ‘for all faiths’, and noted how ‘important’ this is for residents ‘in the lead up to Hanukah and Christmas.’

“These tiers are designed to reduce transmission and keep the R rate below 1. So, if we all continue to follow the guidance, we could be placed into Tier 1 - allocations will be reviewed by 16th December. As more of us will be heading out to do Christmas shopping and eat in restaurants, it is more important than ever that we wear face coverings when required, regularly wash our hands and maintain social distancing. 2020 has been a tough year, but the news of a number of potential vaccines gives us reason for cautious hope that there is light at the end of this tunnel, and I would like to thank everybody that has had to make tough sacrifices already this year.”

In an interview with Vibe 107.6 prior to the announcement MP for Hemel Hempstead, Sir Mike Penning, revealed that while he did not want to see his constituency enter Tier 2, he felt it was ‘better than going into Tier 3’ or lockdown. Though he welcomed the fact of some public attendance at spectator sports, Sir Penning expressed concern for Dacorum’s hospitality industry.

“There’s still going to be huge pressures on the leisure industry in particular, so I’m really pleased that gyms are going to reopen. I’m really worried about what’s going to happen, particularly to my rural pubs. How are they going to survive, because I understand that we are going to be able to open pubs but only if you are having a substantial meal. For some pubs, that’s just not viable. I don’t know how we’re going to survive that in an area, which you know locally we are in green. We’re in one of the lowest levels.”

How does the Covid-19 data look across South-West Hertfordshire at the moment?

According to figures released by the Government Office for Science and Scientific Advisory Group for Emergencies (SAGE), the current reproduction number (R number) for the East of England is between 0.9-1.1. In turn, the number of Covid-19 cases per 100,000 people in the population for the week ending 22nd November was as follows:

For a full list of the Tier 2 restrictions, visit: https://www.gov.uk/guidance/local-restriction-tiers-what-you-need-to-know

Take part in our poll below, and let us know your opinion on the decision to place Hertfordshire in Tier 2 post-lockdown.