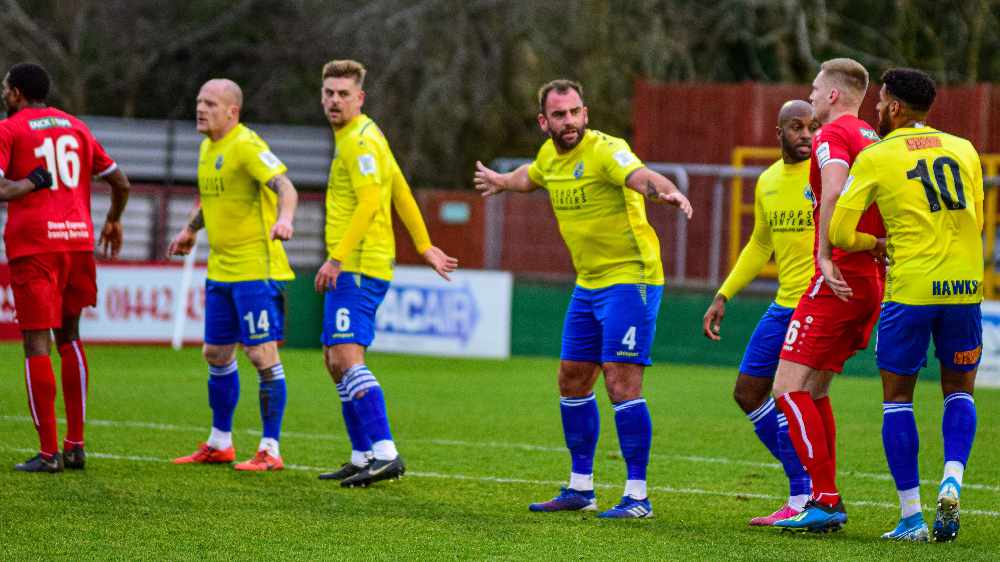 The Tudors remain mid-table as Havant and Waterlooville apply pressure to Wealdstone!

A victory on the road for Havant and Waterlooville, the visitors made hard work of a physical display in Hemel. Strengthening their position in the top three, Hemel Hempstead heartstrings were tugged as the Tudors lost 2-1 at home.

Quick off the blocks, the Hawks were flying early on at Vauxhall Road. A third minute Nicky Bailley free kick met the head of Malta international Sam Magri who looped past a diving Sam Beasant in the home goal. The son of the former Chelsea goalkeeper Dave Beasant frustrated as his team
trailed in what could be a six pointer.

Leading by a goal, Jonah Ayunga should have doubled his sides lead. Miss kicking from two yards out, the Kenyan ought to have converted after some neat inter-passing football as the game entered its fifth minute.

Whilst a dove stood and watched the press box for 90 minutes, Hemel Hempstead manager Sammy Moore was far less impressed as he bellowed instructions to a team very much on the back foot.

Tudors Niko Muir twice came close to an equaliser in the first quarter, the second Hemel home game of the decade a scrappy one as the former Sutton management made their voices heard in the Havant dug out. A challenge made on Hemel midfielder Isaac Galliford paused play as the two sides prepared for a corner that resulted in a fantastic 32nd minute Ross Worner save from the set piece. A late challenge on Connor Essam, the home bench were enraged as the former Concord Rangers backroom protested that away captain Danny Kedwell wasn’t shown the referees book.

A similar argument was presented clearly to the man in the middle from Moore three minutes later, the villain this afternoon fouling Luke Howell as a physical first half drew to a close.

Hemel aiming to make amends from last week’s 2-0 loss, the third minute of the second half very nearly echoed the opening in the first. A wonder save, Beasant was forced to prevent a Havant second, the Hertfordshire outfit relying on their keeper to keep them in the game as Drury headed
on target.

The hosts on the back foot after the interval, proceedings went from bad to worse as a controversial penalty resulted in referee Tom Kirk pointing to the spot. A foul on Josh Taylor in yellow and blue, proven penalty taker Kedwell fired down the middle to ultimately ensure that all the points went
back to Hampshire.

Two down with over half an hour left to play, the Tudors applied pressure and grabbed one back just 12 minutes later. Ross Worner doing all he could to keep a clean sheet in his makeshift shirt, an intelligent Sam Ashford cross met Jack Midson who slotted into an empty net to put his side back into contention.

A point a piece would have been the fairer result in an exciting clash in the National League South. Ashford whizzing the ball across the goal mouth and the visitors responding with promising through balls down the middle, both teams went toe to toe as the Hawks aimed to defend their record as the only team in National League football to go unbeaten away from home this season.

Concluding the tie with a celebratory roar from the away support, Doswell’s Havant and Waterlooville held onto a precious lead as Moore and his colleagues re-evaluate as they look forward to a trip Maidstone on Tuesday night.