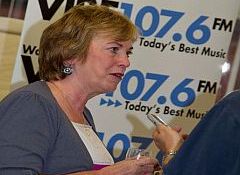 Watford’s newly re-elected mayor has spoken exclusively to Vibe to say how important the younger generation are to the town.

Watford’s newly re-elected mayor has spoken exclusively to Vibe to say how important the younger generation are to the town.

After announcing that this will be her last term in office, Mayor Thornhill believes Watford is a ‘young town’ and young people are important for moving forward to more successes.

She said: “I think all the stuff we’re doing at the top of the town is for young people. How do I know that? Because all the old people say ‘everything in Watford is for young people these days’. Whether that’s our leisure centres, our theatre, our concert hall, our parks and open spaces.

“Young people are always welcome to get involved in any consultation that we do with the council and we are trying to get better at engaging with young people.

“That was an impetus [reasoning] behind me supporting Vibe because I felt that was perhaps a way of saying ‘the mayor wants your views on this. Come on tweet, Facebook, do whatever you’ve got to do but let her know what you think about things.’

“It’s a good opportunity for young people to be proud of Watford and showcase what matters to them, and get involved.”

Speaking about Watford’s great sense of community, Mayor Thornhill has pinpointed how amazing the voluntary sector is in Watford.

Pointing to Vibe as a building block for the community, she said: “The reason I supported Vibe in the early days both financially [through the council] and personally [as a listener] was because I believed that a radio station centred on Watford with an identity for Watford was actually really important.

“Watford is a young town now and there definitely wasn’t a young person’s voice or a younger person’s voice so I was willing to support it [Vibe] for that reason.

“I know that people do listen, and I know that the station is willing to put the questions to people and have them debating the topics that affect people and that’s got to be good; I would like more of that actually.”

The new look of The Parade

Upholding the high work ethic the people of Watford have, Mayor Thornhill spoke about how different communities come together to make Watford a ‘vibrant town’.

She said: “Yes [there is a strong sense of community] and many communities. Lots of nationalities, all of whom really want to re-enforce their own cultural identity and that leads to quite a vibrant town.

“There is a very strong body of people who are up for the town and contribute to the town. We’re the only free standing town within the M25 and as such we’re quite passionate that ‘We are Watford!’”

Want to find out more? Hear what else Mayor Dorothy Thornhill had to say about Watford