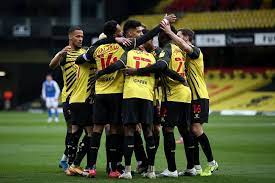 Following favourable results on Good Friday Watford find themselves nine points ahead of Swansea and Brentford, and the lunchtime kick-off for the Hornets means that they have the opportunity to wrap up the points before their rivals set foot on the pitch for the second half of their Easter fixtures.

The Hertfordshire side's win over Sheffield Wednesday was far from a walkover; they performed well in parts and boasted the most clear-cut chances, but Wednesday threatened throughout at Vicarage Road and were perhaps unlucky not to have snatched a point. The result did however mean that Watford notched their sixth successive win, and perhaps even more impressively, their tenth in eleven games. The quick turnover in fixtures will likely rule out Joao Pedro, who suffered an injury to his right ankle in Friday's win, and we may see heavy rotation given the small time period since the last game. Ken Sema, often a shoo-in for the Starting XI, was on the bench for most of the last game having only played for Sweden on Wednesday. The winger may return in Joao Pedro's place for the trip to the Riverside.

Middlesbrough tasted defeat at the hands of fellow Play-Off prospects Bournemouth on Easter Friday. The main source of concern for Boro fans seems to be in attack; Britt Assombalonga's contract expires in the summer and they have struggled at times to find the target consistently. Goalkeeper Marcus Bettinelli is also struggling with confidence as of late, but the form of Neil Warnock's side isn't much of a cause for concern. Prior to their losses away to Millwall and Bournemouth they picked up important victories over Preston and Stoke, and have won ten at home this season, the eighth best record in the division.

George Saville was rested on Friday having returned from international duty with Northern Ireland in midweek, but teammate Paddy McNair was immediately brought back into action. Warnock has mentioned on a number of occasions that his squad is thin and he must be careful with team selection, so we may see the likes of Ashley Fletcher and Chuba Akpom enter the fold. Marcus Tavernier and Dael Fry won't be in contention on the other hand, they're set to miss out on at least a week of action.

Warnock has experimented with different formations in recent weeks, and switches between three and four in defence. Given that the 4-4-2 didn't quite work at the Vitality Stadium on Friday we may see him revert back to either a 4-3-3 or three at the back line-up instead.

This was the opening fixture of the 2020/21 season. Craig Cathcart's header was the solitary goal in a 1-0 Watford win at Vicarage Road.

The last meeting between these sides at the Riverside Stadium was back in October, and also resulted in a 1-0 win for the Hornets. Jose Holebas' rocket the difference maker for Walter Mazzarri's side.

Adept to playing in the centre of defence and in holding midfield, Paddy McNair is arguably Middlesbrough's most consistent performer of this campaign, and seems to be the glue that holds Neil Warnock's side together. He demonstrates a wealth of experience, even at 25, and regardless of where he may be deployed he could be crucial to preventing some dangerous attacks from the visitors.

The newly-capped Jamaica International is by no means guaranteed to start on Monday lunchtime but if he does it may suit him perfectly. Skilled at running into pockets of space and slotting past goalkeepers he could be the perfect striker to use against Bettinelli in the Boro goal. With his newfound confidence and a creative side around him, this is an opportunity for Gray to add to his goal tally and build his confidence in a competitive run-in.

Neil Warnock's sides always have the ability to frustrate and to beat any side on a given day, but Watford are beginning to regain the momentum from before the International break. I don't think it'll be easy for Xisco Munoz's side, but I think they'll do just enough to seal the all-important three points.