X-Men: Days of Future Past

Founding Director of the X-Men movies Bryan Singer, has another attempt at this franchise, hard to believe the first film came out fourteen years ago. In this latest edition Singer has a star studded cast to work with, in what becomes a dizzy experience moving between past, present and future. In its opening weekend the film has grossed $281 million, the best performance ever for a Fox film, even beating Avatar.

The film opens in a wasteland clearly torn by war and somewhat reminiscent of the first Terminator film, as mutants move around in the shadows trying to avoid predatory robots set on destroying them. The tone of the film is set as mutants’ battle with the robots in the first of a host of set piece CGI action sequences. However, the mutants are hard pressed and Wolverine (Hugh Jackman), Charles Xavier (Patrick Stewart), Magneto (Ian Mckellen) and Storm (Halle Berry) with a few others in tow, flee to a castle in war torn China.

The back story which gradually unfolds, is that following the Vietnam War an entrepreneur, Bolivar Trask (Peter Drinklage), has developed an army of robots known as Sentinels using genetic material from Mystique (Jennifer Lawrence), to destroy all mutants, who are seen as the greatest threat to the human species. The mutants can only be saved by preventing Mystique trying to assassinate Trask in an incident triggering the conflict and which takes place in the seventies.

The plan the survivors hatch in China, is for Kitty Pryde (Ellen Page) to teleport Wolverine back into his past body to change the course of events. Wolverine arrives in 1973 and of course meets up with the cast of X-Men First Class, with James McAvoy and Michael Fassbender being the younger versions of Stewart and Mckellen. 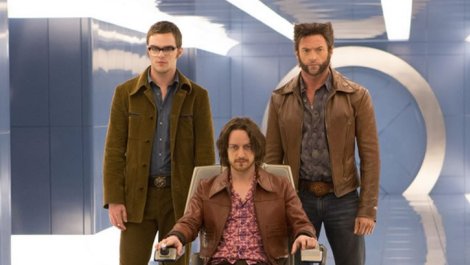 One of the first tasks for Wolverine is to extricate Magneto from a high security prison within the Pentagon. It is during this escapade that he meets up with a new character, Quicksilver (Evan Peters), who steals the film for the short period he is in it. Quicksilver’s attribute is that he can move impossibly fast and in the best scene of the film confronted by security guards firing rounds at them as they attempt to save Magneto, Quicksilver slides around the room in which they are trapped to the sound of Jim Croce’s Time in a Bottle, rearranging the scene in a visually stunning and amusing two minutes.

Following this the plot charges along at a frenetic and sometimes inexplicable pace as Magneto switches allegiances for no apparent reason and Mystique changes persona at regular intervals in her pursuit of Trask. All of this takes place against the backdrop of total annihilation in the future and a race against time as the Sentinels close in on the last remaining mutants.

Overall this is an enjoyable X-Men film. I liked the seventies setting, there are some terrific sequences, including a flying sports stadium, a booming soundtrack and some of the cast rescue their characters from the usual lack of script and meaningful screen time. The scene with Quicksilver is something of a classic, this film is not, but if you enjoy the Marvel movies it’s worth a visit to the local cinema.

By the way, if you really want to see every last moment of this movie stay in your seat, even if the rest of the audience leaves, until all the credits have rolled.

(X-Men: Days of Future Past is available on DVD and Blu-Ray).