The Wolf of Wall Street

Howard reviews The Wolf of Wall street directed by Martin Scorcese and describes it as a three hour movie on speed.

I have to be honest I now have no idea who will win some of the Oscars having seen Leonardo DiCaprio’s portrayal of Jordan Belfort, a hedonistic New York stockbroker, which is quite brilliant, even if one is left with no sympathy for this rags to riches and almost back again character.

This movie brings director Martin Scorcese back in tandem with DiCaprio having worked together on Gangs of New York, Shutter Island, The Aviator and The Departed. The film is a black comedy based upon the memoirs of Belfort, which brings to life the excesses of his behaviour and lifestyle during the Nineties and pulls no punches in its graphic depiction of his growing desperation to live life on the edge.

The adaptation by Terence Winter runs for pretty much three hours and by all accounts it could have been much longer, but even at this length the film never drags and zips along at a relentless pace. We meet Belfort as he starts his career at a blue chip Wall Street firm where one of the senior traders, Mark Hanna, played outrageously by Matthew MacConaughey gives him advice that he takes with him through the film, including a little chest thumping that wonderfully re-emerges towards the end of the movie when one has almost forgotten the bizarre restaurant scene where it is introduced.

Having been made redundant in the market crash of 1987, DiCaprio turns to penny stocks and becomes founder of Stratton Oakmont, conning middle and working class investors into scams where he artificially pushes the price of stocks up whilst making a profit, only for the value to drop as he sells and investors lose out. Ultimately Belfort was investigated by the FBI and convicted for money laundering and fraud, but this film does not dwell on those that suffered from his activities and indeed may be seen as a little shallow because of it, as it seems to celebrate the outrageous social life and working environment Belfort revelled in. 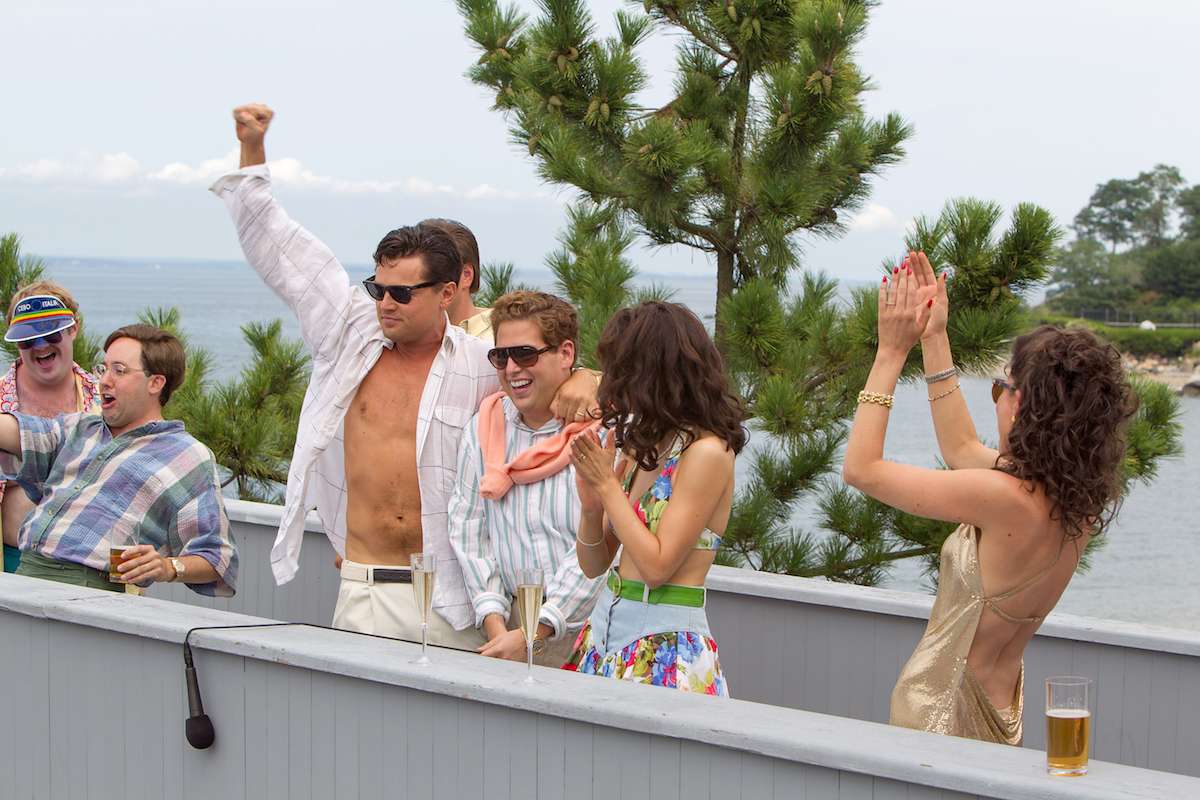 The “Wolf” tag originates from a very unflattering magazine article that only cements his notoriety and has thrusting young bucks queuing up to work for him. His right hand man is Donnie Azoff (Jonah Hill) who is even more unscrupulous and introduces Belfort to crack and many other drugs that they continually need to take as they seek increasingly extreme highs. A day in the offices at Stratton Oakmont could include dwarf throwing, naked marching bands, and an eye popping piece of mayhem which Belfort describes as a “stripper stampede”. His motivational staff speeches are captured at some length and even if the business itself is rotten to the core, one is left with a guilty and sneaking admiration for the energy and skill that these are delivered with and DiCaprio is outstanding at these moments in the movie.

The pace of this film is unrelenting as it dashes from stock fraud and money laundering deals, trips to and from Switzerland to deposit huge amounts of illicit cash, Belfort flirting with his wife’s British Aunt (Joanna Lumley), overdosing on Quaalude and wrecking a very expensive car, in fact just about anything goes.

Ultimately though, it’s a film about a way of life in a get rich quick at other’s expense society and the type of people that thrive temporarily in such an environment. Underneath the humour, lavish lifestyles and anything money can buy kicks that many of the leading protagonists enjoy and which Scorsese depicts with such gusto, one is left with the clear message that money alone cannot bring you happiness. Both of Belfort’s marriages spectacularly collapse as he exhibits an almost total inability to truly love or dedicate real time to anyone, but in the movie he is far from alone in this.

If you like DiCaprio do go and watch this movie, he is quite outstanding, undoubtedly the continual bad language and the lifestyle excesses some may find a little offensive, but it’s a three hour movie on speed and makes for a very enjoyable trip.