Pitch Perfect 2 is of “marmite taste” (you either love it or hate it) as to some, the film may not live up to its 'aca'-amazing original, although I believe it still outshines most film sequels. With the comical, acapella Barden Bellas back on the big screen, they continue to provide us with new ‘aca’-arrangements, comical innuendos and sexual humour, as this time they compete for the world title, but whether it really hits the mark is debatable.

Due to the Barden Bellas being humiliated in front of none other than the President of the United Stated (it is questionable whether Obama really made an appearance), the Bella’s are taken out of the ‘aca’-circuit. To regain their status, they take on the seemingly impossible task of attempting to win an international competition which no American team has ever won. However, with old and new rivals tagging along for the trip, and new dream opportunities presenting themselves, the Bellas have to strengthen the bonds of friendship and sisterhood to create some ‘aca’-magic to compete with the competition, and accomplish their dream once again.

From the opening scene the audience is met with an over the top, eccentric, edgy comedy as “muffgate” (yes that is what they really called it) will have the audience in stitches. Even though I found the comical moments throughout the film somewhat forced and predictable as they try and utilize “Fat” Amy (Rebel Wilson) for almost all of the main “funny” scenes you will manage to at least let out a giggle as you just can’t help but enjoy both the original characters who reprise their roles and the new characters including Hailee Steinfeld who shows off both her singing and comedy skills. The introduction of the robotic German 'aca'-group was (in my opinion) cringe worthy, as they don’t come across as amusing as they are portrayed in the trailer. 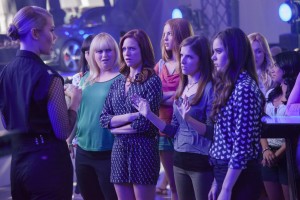 Elizabeth Banks makes her directing debut on her first feature, as she directs this modern teen-orientated comedy as well as reprising her role as one of the snarky commentators. Banks has directed a slick and sharp film as Pitch Perfect 2 looks and sounds great; however it is the interweaving narratives which causes the film to lack the ‘punch’ the original brought to the screen. There seems to be so much going on that the main storyline, which is the Bellas competing in Copenhagen to regain their status as the Barden Bellas champions isn’t the central focus. The romance between Beca (Anna Kendrick) and her treblemaker boyfriend Jessie (Skylar Astin) barely attains any screen time and with Beca gaining an internship at a record label which causes her to rethink her place in the Bellas truly has no relevance to the film.  The introduction of new Barden Bella member Emily Junk (Hailee Steinfeld) whose mother is a legend to the Bella’s aca-history as she has a five-octave vocal range yet we barely get to meet this “legendary” woman played by Katey Sagal. With the film going off at tangents with these interweaving storylines means it may be hard for audiences to leave the cinema feeling satisfied.

Pitch Perfect 2 is an enjoyable and well directed film, but it has unfortunately has lost that aca-sparkle that endeared us within the original. Whilst the actors do have great comedic timing, not all of the humour will be to everyone’s taste.  Nonetheless Pitch Perfect 2 still has a great soundtrack which has been updated! And the film overall is enjoyable, but go in with an open mind and take it for what it is, a modern teen comedy which is over the top and eccentric.