She's All I Wanna Be

Dawn of the Planet of the Apes

The two summer blockbusters go head to head, Transformers and Dawn of the Planet of the Apes and judging by Dawn’s instant box office success it looks like this will be the winner and it really does not disappoint.  It is a thoroughly enjoyable two hour movie with some moments of real excitement and some wonderful CGI effects. I saw this in 3D (as you know I’m not a fan), but the film carried it well and better than most, however, this will be equally as compelling in 2D. 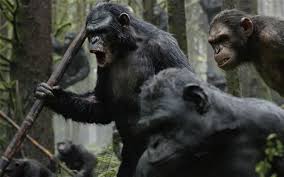 The film starts ten years on from the closure of Rise of the Planet of the Apes, with most of the civilised world having been wiped out by Simian flu. Caesar has in this time mobilised a large number of apes into a fortress in the woods just outside San Francisco. They live a hunter gatherers existence, much as early humans would have and are developing a sign language interspersed with a basic vocal human vocabulary.

Caesar, now with his own family, is played in motion capture by Andy Serkis and is the charismatic and wise leader of the apes. However, his lieutenant Koba (Tony Kebbell), scared from human experimentation is pathologically aggressive and willing to undermine his leader. This balance and the apes world is dramatically altered when they suddenly find themselves faced with the desperate remnants of a human race they had not seen or heard from for many years and which they had suspected no longer existed.

The humans are clinging to life in a beautifully crafted apocalyptic San Franciso, where the last vestiges of power are being exhausted.  Malcolm (Jason Clarke) is tasked with resurrecting the local hydro electric dam to provide electricity to the city, the dam just happens to be right where Caesar and the apes have built their new world. Predictably when these two tribes collide there is tension, uneasy truce’s and violence. The film is shot from the apes perspective, which is both refreshing and makes the film more insightful. Nevertheless both groups have their “hawks and doves”, with Caesar hoping that compromise will allow a future where both humans and apes can exist and Koba hell bent on waging war at any cost. The humans have a parallel struggle of their own with Malcolm, who develops a lasting friendship with Caesar, trying to placate the human leader Dreyfuss (Gary Oldman) who is quite happy to make use of an arsenal of weapons stored in the city. Despite some great scenes of ape and human interaction and understanding, the inevitable decline into war arrives fuelled by Koba’s duplicity. 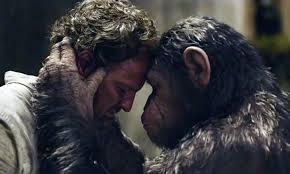 The action scenes are really impressive, as Matt Reeves who directed the ground breaking Cloverfield and Let Me In, captures the apes assault on the human stronghold in a compelling and disorientating manner, rather than the more traditional route of blockbuster action sequences.

Nevertheless, as good as these moments are in Dawn it is the huge attention to detail that makes this movie shine through. In any shot involving an ape or multitude of apes one can see the character of each of them in their faces and movements, not just the main protagonists, which seem to make their very existence somehow seem believable. Caesar’s hair being ruffled by a breeze is typical of a moment that makes the apes seem so much more than CGI creations.

Along with the breathtaking depiction of the apes the film touches on areas such as the role of leadership, compromise and diplomacy and the possibility of friendship even across species, which give this film a depth that most blockbusters just do not have.

I found myself having huge empathy with Caesar, I know he is a monkey, but it's such an enjoyable movie it’s hard not to get totally engrossed in it.  Definitely worth a trip to the cinema in the next few weeks.