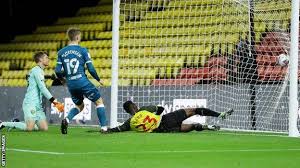 Xisco Munoz's time at Watford is off to a brilliant start following a 1-0 win over league leaders Norwich City. It was a gruelling, end-to-end battle from the start, but Ismaila Sarr's first half tap-in made the difference.

Munoz had deliberately avoided any discussion of his starting formation for the game until the very last moment, deciding on what appeared to be a 4-4-2, with Troy Deeney and Andre Gray leading the line. Francisco Sierralta also earned his first start in the Championship in the absence of William Troost-Ekong and Christian Kabasele. Joao Pedro missed out through injury, and Adam Masina had to make do with a spot on the bench as he returns to full fitness.

It was entertaining from the off. End-to-end, with Watford pressing with urgency. Xisco's cries of "Up up up!" filled the cold winter air as he spurred on his players. Norwich's full-backs Sorensen and Aarons hugged the touchline, linking up with wingers Todd Cantwell and Emiliano Buendia with 1-2's, through balls and overlapping runs. This was well-handled on Watford's left; Ken Sema dropping deep to help out Jeremy Ngakia against Buendia's creative runs, and Aarons' blistering pace. On the right, Kiko Femenia had his work cut out for him. Ismaila Sarr had clearly been instructed to operate solely in the opposition half, often as part of a 3 with Andre Gray and Troy Deeney, and this worked to great effect in attack, but resulted in Femenia having to deal with both Sorensen and Cantwell, the latter of which dribbling frequently into the Watford third.

The Canaries typically like to play defence-splitting through balls Into Teemu Pukki, but to Watford's credit, they found it difficult to in the first half. Instead, they opted for pot shots from range, the likes of Dowell and Mclean in particular testing Ben Foster.

Watford's attack was dangerous, though rarely through the front two's shooting ability. Deeney was instrumental in the build-up play, Gray enjoyed frequent 1-2's and Ismaila Sarr looked very threatening on the right. Their quality was not unrewarded; Ken Sema driving from the left, beating Aarons and crossing low. It was a tap-in for Sarr, but certainly not easy, as he broke ahead of Sorensen to finish coolly.

Etienne Capoue and Tom Cleverley were back to their best driving Watford's engine. They ultimately won the midfield battle, and Capoue in particular intercepted the Canaries' passes with what looked like relative ease.

1-0 at half time wasn't an unfair scoreline, but few would have argued if the teams were level at the break. Watford started the second 45 as the side in control, with far more possession, and a pressing style that caught out Oliver Skipp and the Norwich defenders numerous times.

This is a fighting side, and it was apparent to all that they were confident under Munoz. This forced Norwich Boss Daniel Farke to change his approach, moving to a 3-5-2, Pukki and Jordan Hugill partnered up front, Buendia in behind.

Now the Canaries enjoyed more of the ball, and this was the tale of the rest of the match. Max Aarons whizzed in daunting crosses, Vrancic tried to fashion chances from the edge of the box, and Pukki fought with Wilmot and Sierralta in Watford's third.

The final half an hour was not without controversy. First, when Ismaila Sarr batted away Pukki by the sideline, a flailing elbow striking the Finn. Only a yellow for Watford's record signing, but perhaps lucky to be on the pitch. Later on, Pukki was involved again; Darting ahead of the Watford backline, preparing to strike past Foster, before Adam Masina's trip caught him off-balance. At first glance, a stonewall penalty. On watching the replay, an incredible challenge.

It wasn't to be for the visitors. Watford were solid in defence, leaving few gaps (which, when you have 9 behind the ball, is probably a given). Deeney and substitute Perica remained a little further forward, and Ismaila Sarr made a handful of last-minute efforts to burst up the field, but in the end Watford grinded out the victory through their defensive hard work.  The highlight of the closing stages featured both Masina yet again. Aarons, to the right of the goal, looked set to rifle it into Foster's net and salvage a point, before the returning Italian full back slid in and stole the ball from the former Barcelona target. The Watford bench roared with delight, and the points were won from there.

The Hornets looked refreshed, confident and certainly more attacking, but overall Xisco Munoz couldn't have made drastic changes to the Watford style of play. This seemed to be a motivated performance, one which Munoz undoubtedly played a big part in. It is, of course, still early days, but this victory is a huge boost to his side, and the week long break will provide a fantastic opportunity for the Spaniard to work with his team.

"They fought from the first minute until the last minute."

"Training was very good in the past 2 days, and they played very well today."

On whether he was surprised by the performance: "No! I expected this, they trained very well and I want to say thank you to them. We have a very good group, they wanted this for the fans."

Xisco Munoz isn't yet settled in a house. He lives in a hotel, but dismisses its importance. "I'm always at the training ground!"

Xisco's brother is an analyst at the club, and helped him prepare to face Norwich. He worked alongside Marcelino at Valencia.