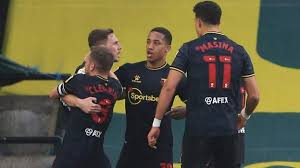 Watford host Gary Rowett's Millwall on Saturday knowing that a win over the London side will seal promotion to the Premier League at the first time of asking. Fans await this fixture in anticipation, whilst Xisco Muñoz and his Watford side wish to treat it as "just another game" before they can celebrate anything.

Kiko Femenia returns from suspension for this crucial game; the Spaniard received two yellow cards in the derby defeat to Luton and missed the win over Norwich City. With second-choice right-back Jeremy Ngakia injured for midweek, Watford stalwart (and natural central defender) Craig Cathcart stepped up and put in an impressive performance. The Hornets' 1-0 win over already promoted Norwich will surely result in a boost of momentum, and at a perfect time too, particularly with Brentford and Swansea dropping points in their respective games.

It now appears that there's another horse in the race. Bournemouth, who have remained largely as play-off candidates for the majority of the season have now emerged as an unlikely challenger to Watford's second spot. The Cherries have won their last 7 in the league and now sit in third. Their maximum possible points total is 86, meaning a Watford win on Saturday would still rule them out of contention, but they play fellow chasers Brentford in the Saturday lunchtime kick-off.

The point we can make absolutely clear is this: If Watford beat Millwall they will be promoted to the top-flight regardless.

This is where things may get a little confusing, but bear with me.

No matter what happens, if Watford draw on Saturday, Swansea cannot catch them (note: Swansea play after Watford).

If Bournemouth and Brentford draw:

Bournemouth will no longer be able to catch Watford (maximum 84 points, Watford currently have 85).

Brentford can reach a maximum total of 85 points. If Watford lose all three remaining fixtures and Brentford win their final three, Brentford can still finish second.

Watford need to draw or win against Millwall for guaranteed promotion.

Brentford will no longer be able to catch Watford (maximum 84 points, Watford currently have 85).

Bournemouth will no longer be able to catch Watford (maximum 83 points, Watford currently have 85).

Brentford can reach a maximum total of 87 points.

In short terms, if Brentford and Bournemouth draw, a Watford draw will do it. Any other result will require Watford to win to guarantee promotion on Saturday. But for Watford to think about promotion, they need to find their way past Millwall first.

Watford fans will know that Millwall won't be easy opponents. The Lions frustrated the Hornets in a 0-0 draw earlier this season, and they have a tendency to pick up draws against higher placed league opposition. Mathematically they have very little to play for this season, Gary Rowett's side cannot reach the play-off places nor get relegated, but a top-10 finish is certainly in his sights, as they currently sit in eleventh. Whilst they are yet to lose back-to-back games this season, they are winless in three - a 4-1 home defeat to Bournemouth being their most recent result. In terms of team news, Matt Smith, Ryan Leonard, Murray Wallace, Ben Thompson, Shane Ferguson and Shaun Hutchinson will miss out again, they weren't available in midweek and need a little longer before they can return to the first-team.

Rowett typically opts for a 3-5-2 formation; but whether the dismal defeat to Bournemouth forces a change in system remains to be seen.

These sides' last meeting at Vicarage Road came in 2014. The Hosts took the points on that day, with Matej Vydra, Daniel Tozser and Gianna Munari scoring in a 3-1 win.

Watford's recent form against The Lions has been fairly poor. Before the aforementioned 0-0 draw at the Den in January Millwall upset The Hornets in FA Cup competition, with Steve Morison netting the only goal.

Xisco Muñoz's side will be eager to replicate their result from Boxing Day 2013, where they thrashed their Visitors 4-0. Current Hornet Troy Deeney found the target, as did Ikechi Anya, Fernando Forestieri and Lewis McGugan.

The tireless midfielder made his return from injury in the defeat to Luton, and started in midweek against Norwich, and already looks to have picked up where he left off. As one of the longest serving current Watford players this game will mean a lot, and his quotes on the Watford FC website reflect that:

“These next two weeks are a hugely significant part of my career. Ever since we got relegated, and with my injury problems, the club has stuck by me. I feel a personal debt and you can obviously see it's quite emotional for me. I'm the kind of guy who knows how well we are paid as footballers and when you are injured, you don't feel like the club are getting a return for that money.

“I have had my injury problems here, but I've tried to stay in the main as fit as possible and keep in the best shape I can. I now want to pay back everyone's hard work and those who have helped me and stuck by me personally. I feel I could make a big repayment if I can give another big performance on Saturday and help us do the job.”

The only player to put the ball in the net in the reverse fixture (before it was ruled out for offside) Jake Cooper has been a commanding centre-half this season at The Den. In a game where Watford's ability to score may be the difference between promotion and an extra week's wait, Cooper will be crucial to this clash one way or another.

Surely the biggest game of the season for Watford, it's difficult not to get excited for this one. Millwall won't make it easy, and will try to spoil the party, but the sheer quality of this Watford squad, combined with the momentum of a vital win on Tuesday, means I think the Hosts will see this through and achieve promotion back to the Premier League.

Televised? No, but available on Watford's Hive Live service, iFollow, and you can check out live tweets of the action from Vicarage Road as it happens @VIBE1076.